Who’s got four thumbs and goes to the Florida Keys on a whim, without any summer clothes to speak of? These two!

We never planned to go to Florida on this first trip. However, once we realized that the temperatures in North Carolina weren’t what we were looking for and we had seen what we wanted out of South Carolina, it just made sense. So! We bombed straight down to the Keys. Stopped by a dive shop, bought ourselves some snorkel gear, bathing suits, and a few dresses from Goodwill (for Colin, obviously). Now, we were Florida ready.

Overall, we spent a week in the Keys. It was absolutely phenomenal. That is in large part due to two amazing people: Doug and Andrea.

Without them, we wouldn’t have been able to spend half as much time in the Keys, OR have half as much fun as we did. It all started on Day One in the Keys when we met Doug, who was guiding our snorkeling trip at Pennecamp State Park. We got to talking, he found out we lived in a van, him and his girlfriend lived in a tiny house, and we decided to have dinner. Long story short, they opened their home and hearts to us and told us we could stay with them as long as we wanted. Between dinners, a movie night, a day at the beach, and nightly talks, we truly felt like we were at a home away from home (and they had two dogs which I spoiled with all the snuggins). We are still floored by the universe bringing us all together and Colin and I are all the better for it. Thank you, Doug and Andrea, for your overwhelming generosity and hospitality.

So, what did we do in the Keys now that we had a home away from home? ALL THE THINGS!

Snorkel at Pennecamp State Park: Our first snorkeling trip (where fate introduced us to Doug)! We toured the Visitor Center, learned of the impact Hurricane Irma had on the park, and hit the beach to relax and try out our new snorkel gear. A few hours later, we were on the snorkeling boat. Doug called out the whitest people on the boat (us) and reminded us to put on that SPF! Check and check. We visited three different areas of the reef and saw so many beautiful fish and coral. Visibility and weather were stunning. No water camera for us, but here’s a photo of our return to shore!

Sombrero Beach: Our first full day with Doug and Andrea was spent hitting up the local spots. We spent a day at Sombrero Beach stand-up paddle boarding, kayaking, and soaking up some rays. Then, we enjoyed an evening cocktail at Marker 88 while witnessing a *gorgeous* sunset. I had a key lime pie martini and it was DELECTABLE. 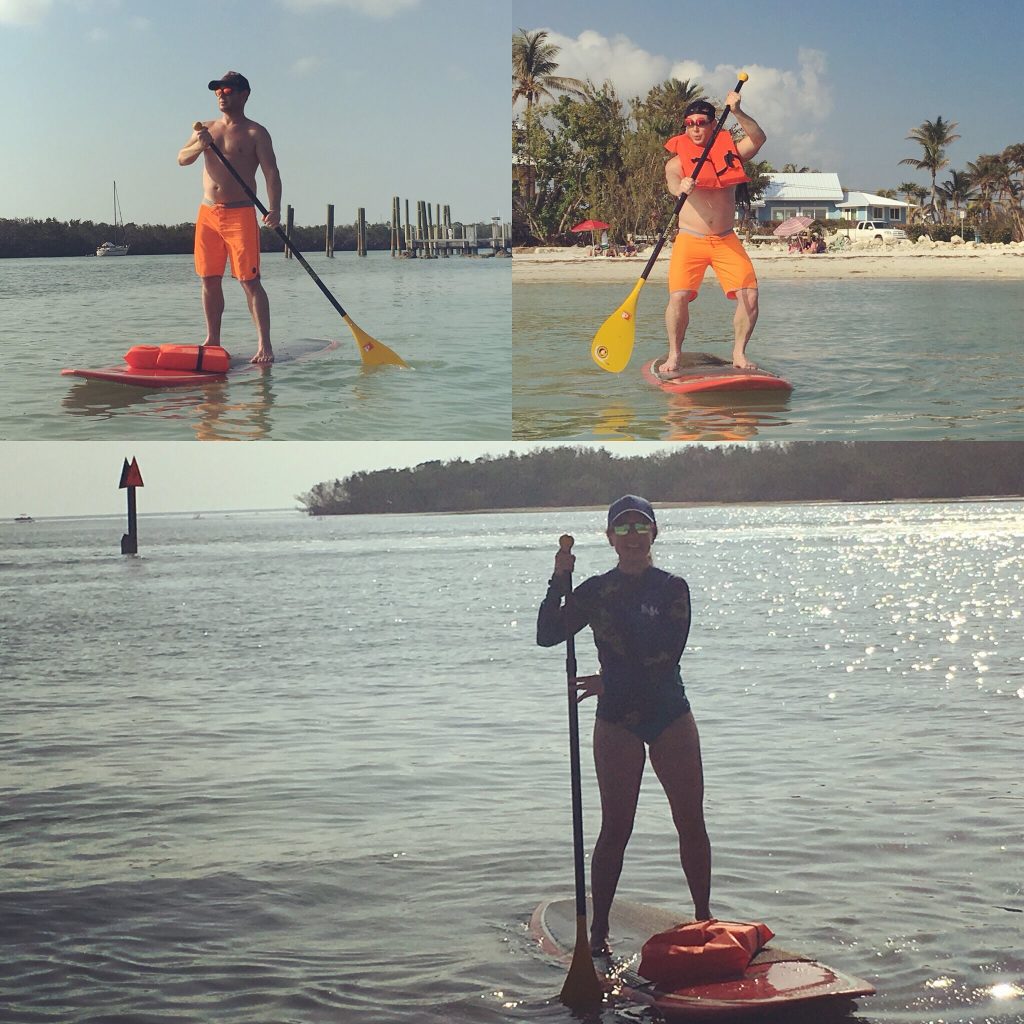 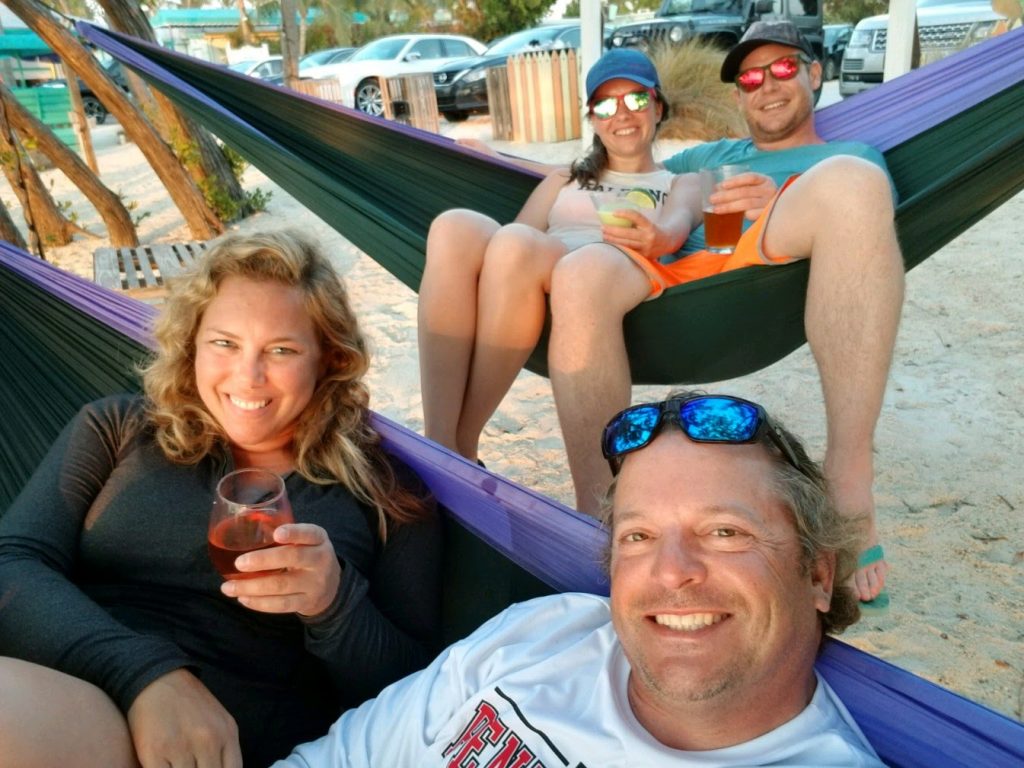 Kayak with Manatees: Doug and Andrea live in Key Largo right next to a canal that leads to the gulf and other canals. We borrowed kayaks and took them for a spin around the neighborhood. We were really hoping to catch a glimpse of a manatee. Well, we ended up seeing at least four manatees, possibly five, of all sizes. They were so peaceful and calming and came right up to us. Both Colin and I had manatees swim around and directly under our kayak and we couldn’t stop smiling. [envira-gallery id=”3290″]

Tour Key West: We couldn’t possibly come to the Keys without visiting Key West. That’s sacrilege and, frankly, I won’t stand for it. Thankfully, we found an open parking lot (this is KEY given Vaniel’s height restrictions) that didn’t cost an arm and a leg and we toured the town, cheaply, as van people do. We soaked in all the free sights at Mallory Square, watched the sunset, ate delicious food from a food truck, and walked the town, amidst hundreds of other tourists.  [envira-gallery id=”3291″] 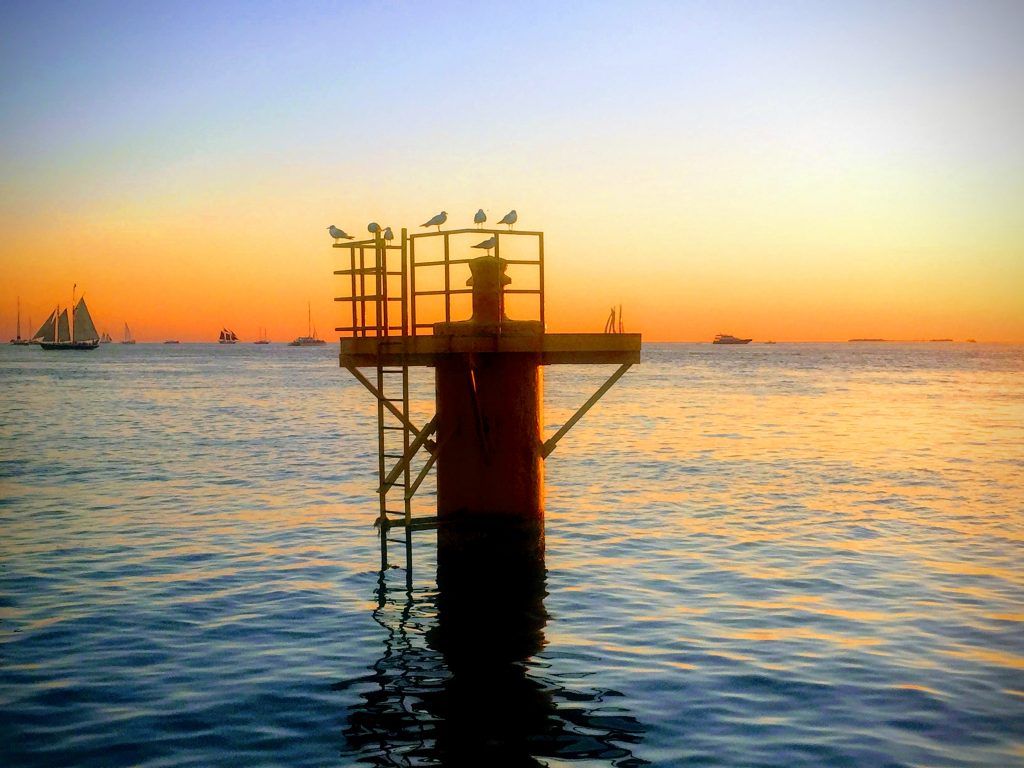 Snorkel at Dry Tortugas National Park / visit Fort Jefferson: This was a day and a half. Dry Tortugas is an island and one of the most remote National Parks. You can only get there by boat (or seaplane for those with the dough) and tickets book up far in advance. So, for people who live on the fly, your only option to get on the boat is to stand by and hope someone is too hungover to make it for that 7:30 AM last boarding call. The standby list opens at 6:30 but we didn’t want to show up at 6:15 and find eight other people ahead of us in line. So, we did the only reasonable thing you can do when faced with such a situation: we woke up at 4:15 and claimed our spots at the head of the line at 4:35. No one else showed up until 5:30 but it was worth it: we were the only ones who made the trip that day (and I got a lot of reading done).

The boat ride was over two hours each way and we had about five hours on the island. Unfortunately, conditions weren’t stellar for snorkeling as there was a lot of chop and visibility was limited. We snorkeled our way around most of the island but I was happy to get my feet on land. Call me crazy but I don’t like to snorkel with less than five foot visibility because I rather keep a large distance between me and any creature I may not want to have contact with. In the middle of the gulf. With no lifeguards or anyone nearby to hear my screams for help. Except Colin. Who laughs while I hyperventilate because apparently it sounds funny. It’s ok though because when he laughs, he gets water in his mask and then I get to cherish the retribution that follows as he tries to clear it in choppy waters. Ah mi, amor… But I digress: no longer snorkeling, we toured Fort Jefferson and enjoyed some incredible views of the blue waters surrounding us. [envira-gallery id=”3292″]

Snorkel at Cheeca Rocks off Islamorada: Determined to see a sea turtle, we booked another snorkeling trip in a different area of the Keys. We had amazing weather and snorkeled around a donut hole shaped reef with perfect visibility. While we didn’t see a sea turtle, we did have a reef shark swim right below us and that was AWESOME. But what really made our trip to Islamorada memorable was the people we met there: Rob and Jamie, a like minded couple living in a camper. We spoke of living simply, toured each others’ homes, Rob taught Colin how to climb a tree for coconuts and open said coconut, and they gave us a CD of their band, Occupants of the Sound which provided the perfect soundtrack for the drive back to our home in Key Largo. [envira-gallery id=”3299″]

All in all, we got our money’s worth out of our snorkeling gear, saw some incredible sunsets, and met even more incredible people. And we’ve only just begun!