We never planned to spend a week in the Provo/Salt Lake City area. Heck, we didn’t even plan to spend a few days there. Vaniel, however, had other plans in mind. He had been experiencing some electrical issues so we got him into a Dodge dealer ASAP while he was still under warranty. His “progress” was a rollercoaster of frustrations, hope, annoyance, and frustrations yet again.

Thankfully, we were not completely stranded without a home. When Vaniel was in the shop, we thoroughly enjoyed the five-star Provo Rec Center: rock climbing from the pool, hot tub, weight equipment, solid wifi, and even a hip hop class for me to lose myself in. When Vaniel wasn’t in the shop, he was with us on our adventures, making the most of our time.

Early October makes for some truly scenic biking along Ann’s Trail in Draper, Utah. Not only did we get to see the changing leaves, we also got to see homes bigger than a Mormon temple, which is really saying something.

Ever hear a moose mating call before? It is UGLY. Colin and I had just begun our 7 mile trek up to Lake Blanche when we heard this god awful noise. Our first thought was that an animal was dying a horrible, wretched death somewhere. Somewhere close. A mile later, in the distance, we see a moose. Then, we realize it’s two moose (or moosen, as some might say) and the male is perfecting his love ’em and leave ’em routine. He dismounts and we think, well, that was pretty cool and hilarious; at least we can hike in peace now. But either that female was lamenting over her lover leaving her so soon or that man was on the prowl AGAIN just looking for more tail because those sounds of nature were our soundtrack throughout the majority of this beautiful hike. 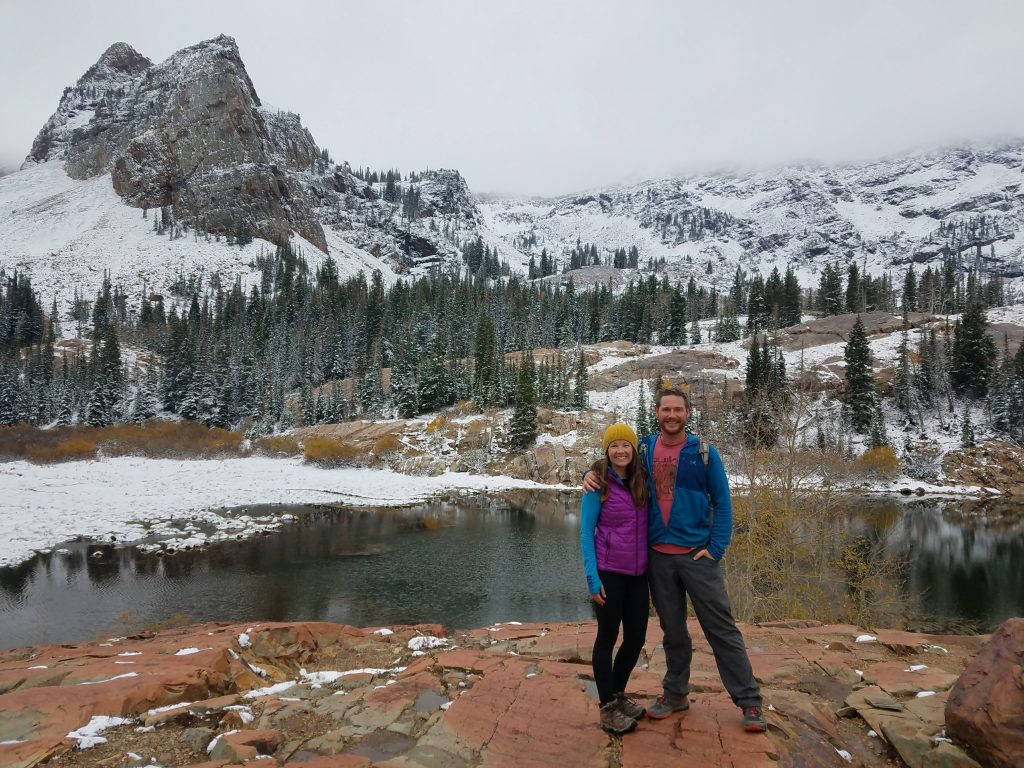 You can’t throw a stick in Utah and not hit a Mormon (for the record though, you should NOT do this).  As such, we decided to soak in a little Mormon culture by visiting their world headquarters in Salt Lake City. We went on a Sunday afternoon, which, in hindsight, was a TERRIBLE IDEA. Every Mormon in town was there and they were all dressed in their absolute Sunday best. Meanwhile, Colin’s in sweatpants, I’m in leggings and we both have our puffies on. We do not blend. With that said, it was interesting to be amongst it all. The architecture is stunning and the service is projected throughout the entire square. And if you ever want to feel like you’re in the Matrix, just get to the square on Sunday, right before the closing prayer. Everyone stops, and I do mean stops. Parents took toys away from children, couples stood holding each other, and nobody said a single word (except, of course, the tourists blindly yapping about). It was really something.

Then, on October 10, the skies parted and Vaniel was finally ready to skedaddle out of Provo. Well, “ready” is a loose term and not everything was settled, but it was good enough for us and we had friends to meet in Moab. Which is where we’ll journey next. 🙂